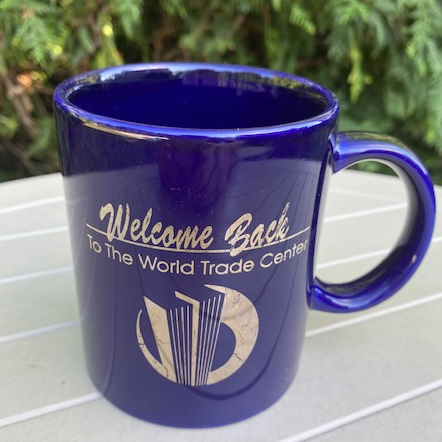 I was fast asleep in my bed, curled up with my first-born child, on the morning of Sept. 11, 2001. I had been sleepless most nights in the weeks leading up to that day, thanks to this colicky newborn at my side, so I was initially annoyed to be woken around 9:15 am by my mother-in-law, Linda. She had burst into my bedroom muttering what seemed like nonsense about how Adam had called and that he was ok.

Adam, my husband’s eldest brother, was supposed to be at work at his office in the World Trade Center that morning. But, as luck would have it, he’d eaten a bad Greek salad for dinner the night before and called in sick. His mother had not known that, and she had not been able to reach him for a time after she’d seen the news about a plane flying into the WTC. Understandably, she’d slipped into a panic. But soon, Adam was on the phone saying he was fine, and that his colleagues had been evacuated safely from their low floor in Tower 2. Later that day, Adam received the tragic news that his dear friend since his college days at Tulane University, Douglas Irgang, who had worked on a higher floor, had not been as fortunate.

After talking with Adam, Linda and I called my husband Jason, who was in California on his first business trip since the birth of our daughter. He was safe but rattled. He could’ve so easily ended up on one of the ill-fated flights to California from Boston had his schedule been different that week. I hung up with Jason, rose from my bed and gingerly carried my uncharacteristically sleeping baby into the living room to watch the live news coverage in helpless, stunned silence as the towers burned and then collapsed into a dusty hellscape.

My mind immediately flew back to a completely different moment, on a blindingly sunny July day nine years earlier. I was exiting #2 WTC (the South Tower) through the massive revolving doors, having just finished interviewing for my first real journalism job on the 18th floor. I was feeling fairly confident that I’d get the job after a senior editor me told me during the interview that I’d crushed the writing test he’d given me. I remember thinking that although this publication was far from being a household name, I was exhilarated by the possibility of working inside one of the only buildings in the entire world that absolutely everyone on earth had heard of. I suddenly felt famished, so I darted across the plaza to a deli and bought myself a massive chicken-salad sandwich on a bulkie roll. I sat outside demolishing the sandwich, observing the swarm of business-attired people buzzing around me, and tried to imagine my new life in NYC. Later that week, I received word that I was hired. When I called my mom to tell her about it, she reminded me that my grandmother had worked for the NY Port Authority inside that same building before her retirement in the 1970s.

Nearly a year later, I was walking up Fulton Street heading back to the office with my editor on a cold February Friday in 1993 after going to lunch down the street from the WTC when we registered an overwhelming number of sirens and emergency vehicles descending on the area. What we didn’t know at the time was that a car bomb had just detonated in the basement of our building, which was in the process of being evacuated. All the subways had stopped running and the streets were being closed off. It was starting to snow, so we made our way to the enclosed, glass and steel pedestrian footbridge that stretched over the West Side Highway. We stayed there for a while, watching through light snow flurries as the emergency vehicles streamed into the area from every direction as far as the eye could see. Mercifully, the damage was minimal that day, although our offices had to relocate to temporary space in a different building on lower Wall Street for a while. When we eventually got the green light to return to the WTC building, we found on our desks blue ceramic coffee mugs with the words “Welcome Back to the World Trade Center” stenciled in gold. The whole experience left me unsettled and I moved to Boston not long afterwards.

Several years after that, when I first met the imposing gentleman who would become my father-in-law, I learned his company’s offices had been located in #2 WTC on the 108th floor. In the early 1980s, a monumental rent increase spurred him to relocate his offices to Midtown Manhattan. Although we had ridden those same WTC elevators regularly, along with my grandmother and brother-in-law, none of us had ever done so during the same decade.

We thought about our ties to those buildings on 9-11-2001, and as the horrors continued to unfold in the days and weeks that followed. I learned that one of my beautiful sorority pledge sisters, Melissa Doi, was killed in the attacks that day. Melissa was one of the most kind-hearted souls I have ever had the pleasure to meet. In the words of our mutual sister Kali Plomin: “Melissa was always up for fun and funny stories, and she didn’t tolerate disrespect towards anyone however unintended. We lost a gifted human, a kind friend. We are so thankful to have known her.”

On this 20th anniversary of the vicious and cowardly attacks that have come to redefine many aspects of American life, I get teary all these years later thinking about how Adam’s friend Doug and my friend Melissa—along with nearly 3,000 other precious souls—did not deserve to die that day or in that manner. Add to that the many first responders and victims’ loved ones who have suffered immeasurably as the result of that day. We will carry these memories with us always.

The site where the Twin Towers stood now houses the powerful 9/11 Memorial and Museum. The vast Memorial is breathtaking and strangely peaceful, with the name of each victim etched into bronze parapets surrounding the twin pools of water that represent the towers. The Museum’s Memorial Hall features a mosaic wall of nearly 3,000 hand-painted blue tiles and a large quote from the Roman poet Virgil, which says it all: “No Day Shall Erase You From the Memory of Time.”