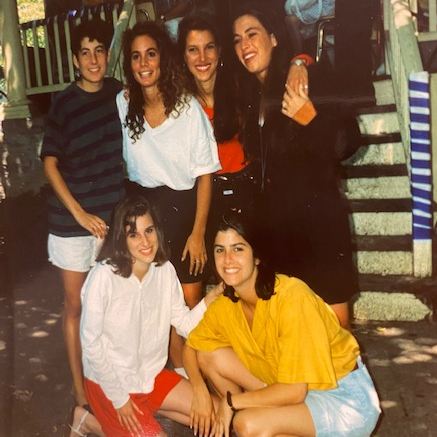 In my senior year of college at Northwestern University, I shared a dilapidated off-campus house in Evanston with a group of close friends. All of us had arrived at college from other parts of the country, but we’d been friends for four years now. We became like family that year, sharing meals, study sessions and sometimes episodes of The Oprah Winfrey Show between classes.

In our final weeks together leading up to graduation, we found ourselves desperately trying to cram in all of the experiences we felt we needed to have before reality came calling. We knew we were on the verge of painful goodbyes. Jobs and other endeavors would soon scatter us throughout the United States and abroad. We were clinging to these precious, last few adventures together to cap off our four incredible college years.

Attending a live taping of The Oprah Winfrey Show became a top priority for us. As this was the early 1990s and our campus was located just north of Chicago, being in Oprah’s audience was something we had talked about doing for years. Oprah’s show was at its height of popularity, and Harpo Productions was growing. Although this was five years before Oprah’s Book Club and nine years before O Magazine’s debut, the tremendous amount of influence that Oprah was already beginning to wield over American media and culture was clearly evident. My housemates and I had been watching The Oprah Winfrey Show since we were teens, and it really meant something to us to be part of Oprah’s live studio audience.

I have no recollection of how we procured the tickets. When the day of our show finally arrived, the six of us boarded the El train from the platform a block behind our house and headed downtown. We then trudged several blocks through the desolate area of Chicago that housed Harpo Studios. Thanks to gentrification, this same area 20 years later would house some of Chicago’s trendiest restaurants. That dreary day, we lined up outside the studio, alternating between excitement and worry about how our hair would look on live TV. Eventually we made it inside to see the show, and we were not disappointed.

When Oprah entered the stage, the crowd erupted in cheers and clapping. It all felt pretty natural, and the show unfolded the way we expected it would after watching it on TV for years. Danny Bonaduce was a guest that day, featured as one of several cautionary tales in this episode entitled “Kid Stars in Trouble with the Law.” He’d found trouble after his Partridge Family stardom, which was pretty well-documented already. I learned a little about the pressures on child stars from that show, but what was most interesting to me was how relaxed and upbeat the environment in the studio was, even though we were on live TV and the topic was relatively intense for the guests.

After the show, as the audience filed out of the studio, Oprah graciously stood near the exit to shake our hands and thank us for coming. We were amazed she would do that, and we were even more elated when she took an interest in our little group of friends. My friend Lisa wore her incredibly thick, dark hair long enough to reach the top of her blue jeans back then, catching Oprah’s eye. After Oprah complimented Lisa’s stunning hair, we practically floated back to campus, arriving home to messages on our answering machines from friends and family around the country who had seen us on TV in the studio audience.

At the time when I bore witness to Oprah’s mega-star power with some of my closest friends, I was unaware of the deep friendship she had cultivated with Gayle King. Decades later, however, the Oprah-and-Gayle BFF story is so well known that it clearly dominated the list of famous friends that Julia and I began compiling when we first started brainstorming ideas for this website.

OprahDaily.com recently published a 45-year timeline of Oprah and Gayle’s friendship, which first began when they met as young journalists at Baltimore’s WJZ station. They were working in different departments, but they both remember the spark for a deep life-long connection was struck by fate in the form of a snowstorm one night. Gayle couldn’t make it back to her home in the suburbs, so Oprah invited her to stay over at her place nearby. Just like Julia and I credit Glen’s party back in 1987 as the moment our friendship grew roots, Oprah and Gayle believe that snowstorm put them on a path toward a deeply meaningful and rewarding friendship that has stood the test of time and other challenges.

In another OprahDaily.com article, Oprah talks openly about her friendship with Gayle: “For years, people have marveled at our friendship—and sometimes misunderstood it. But anyone who has a soulful bond with a friend, a friend who would do anything for you, who revels in your happiness and is there to comfort you in your sadness, gets it exactly.”

Oprah goes on to describe how their friendship works because they are both content and secure in their own lives. They listen to one another and speak honestly with each other, and they share a mutual “respect and regard.”

I don’t know about you, but I find it wonderfully refreshing to see a positive story about celebrities involved in a healthy, enduring and thriving friendship. At a time when it seems the headlines are mostly negative, with salacious photos and vicious stories about bad breakups and family drama, I hope more attention starts focusing on the Oprah-and-Gayle stories. And as I look back on the 30 years that have elapsed since my Oprah moment with my college crew, I am grateful that we’ve also continued to revel in one another’s happiness and support each other through challenges and despite distance for all of these years. Certainly, our weekly zoom calls during the Covid-19 pandemic have lifted our spirits immensely. Although you won’t find a timeline of our friendship highlights in O Magazine, I suspect even Oprah and Gayle would appreciate the way the six of us former housemates have stuck together over all these years.